You are currently browsing offline. Some images may be missing and some functionality may be unavailable.

I worked for agencies for 9 years between 2011 and 2020, either in long-term employment or on a freelance basis. I have worked on a wide range of projects in that time, including bespoke applications, lead generation websites, and advanced brochure and marketing websites.

Below are a few projects I was heavily involed with or built during my time working for agencies.

Please note that these projects were all clients of the agency I was working for at the time, and were not direct clients of myself.

Ars Technica is a website covering news and opinions in technology, science, politics, and society. It publishes news, reviews, and guides on issues such as computer hardware and software, science, technology policy, and video games.

Audentio were given the task of migrating the old phpBB discussion forums to XenForo, and re-integrating the comments with the WordPress articles. A linked thread is created for each article, and replies to the thread serve as comments.

The old comments integration manually pulled in comments from phpBB and displayed them in a custom UI, but we took the decision to embed the forum as an iframe to use as a comments section. This would save having to build custom functionality such as moderation tools and voting features into WordPress itself as everything would be implemented on the forum, and would also mean there would be automatic feature parity between the comments and full forum.

While this approach ended up being a success, it wasn't without its challenges - a lot of work was needed to ensure the page would be styled correctly within the iframe, that popups and modals would open in the correct place, and that scroll positions and comment permalinks functioned as expected. After several rounds of community feedback, we ended up with a stable and well executed implementation. 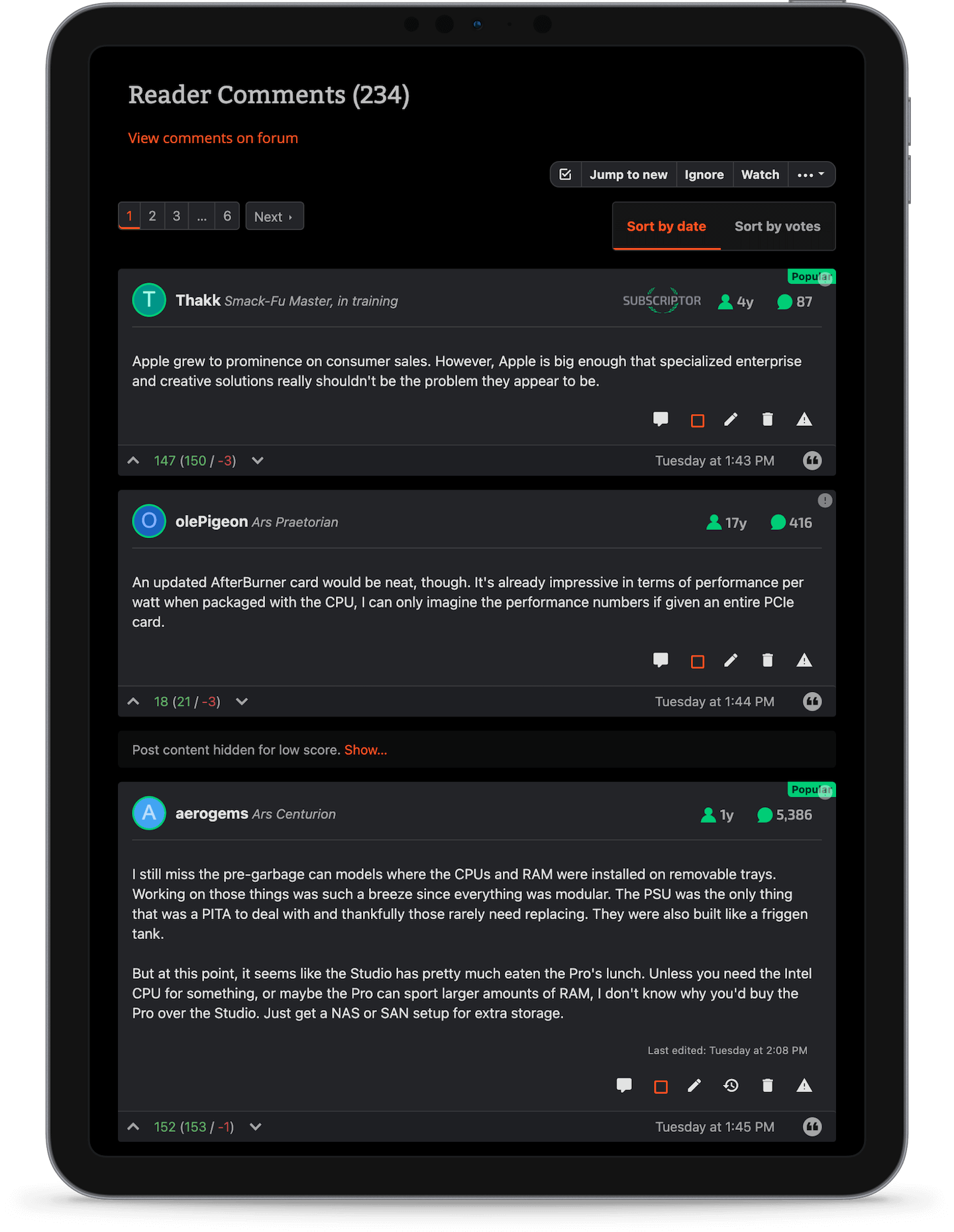 goalgiving is a platform to raise money for charity through the power of sport.

The platform works by allowing users to back their team by pledging to donate for every win, goal, or picking from a range of other metrics. Every time their team wins or scores, they donate money to charity; it's win win.

Match results are fed into the system, which are then processed to cross-reference them against active pledges, at which point payment is taken automatically and paid directly to the charity. 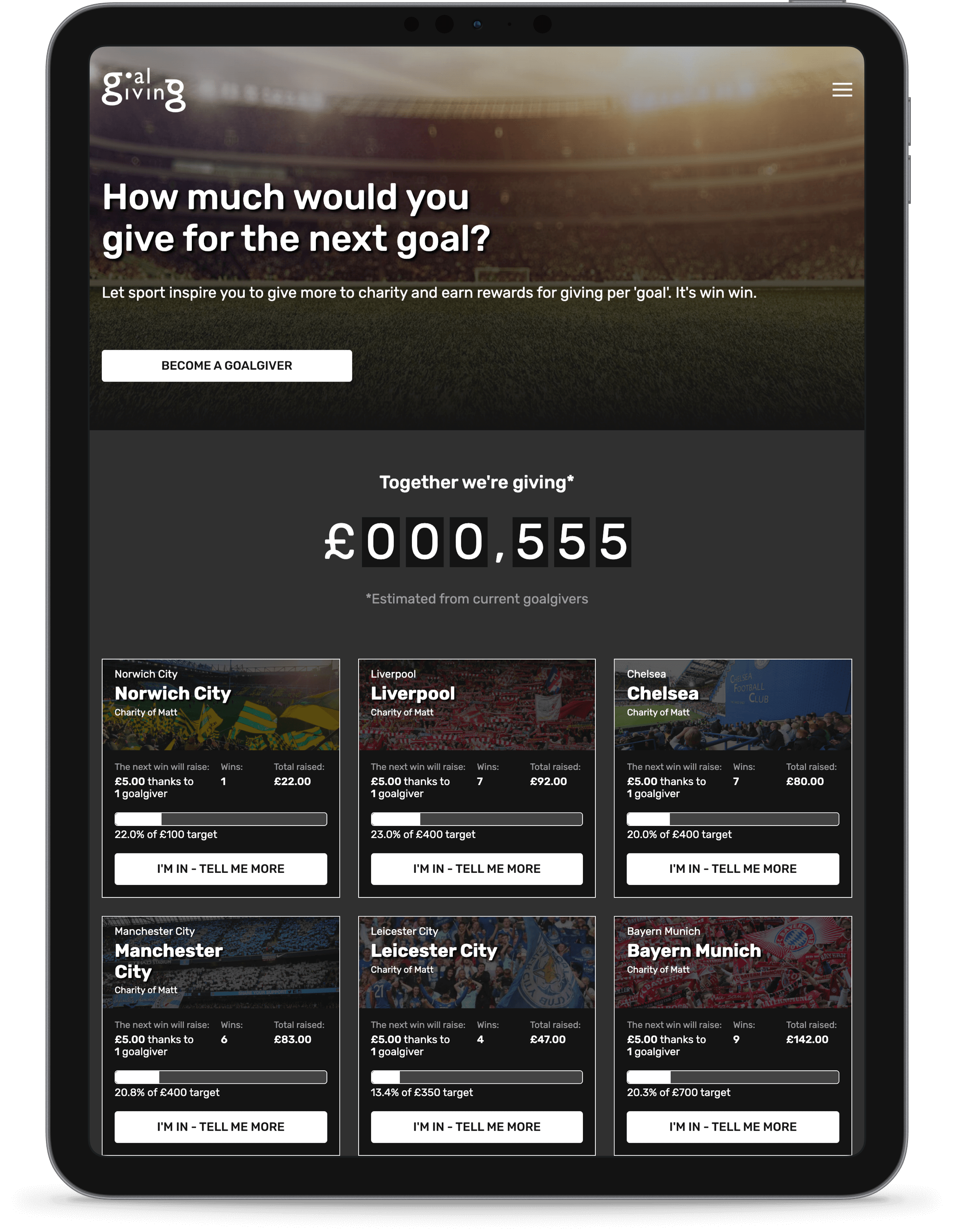 The bespoke platform, which I developed from the ground up, is built in Laravel, and utilises Stripe Connect to process payments automatically when a pledge is converted by a successful match result.

goalgiving partnered with Leeds United Football Club for its launch in August 2019, and to date has raised over £15,000 for charity (restricted in part by matches being postponed due to the 2020 covid-19 pandemic).

Sadly, despite promising links with large clubs, and after a re-designed front end was built in React, the site ultimately shut down in 2022, just over 3 years since launching.

King Edward VII's Hospital is a private hospital in London, counting the Royal Family among its patients, as well as having patronage from Her Majesty The Queen.

I built their new marketing website with WordPress, and used the Algolia search engine service for powerful and advanced instant searching, as well as the Worldpay payment gateway to process payments. 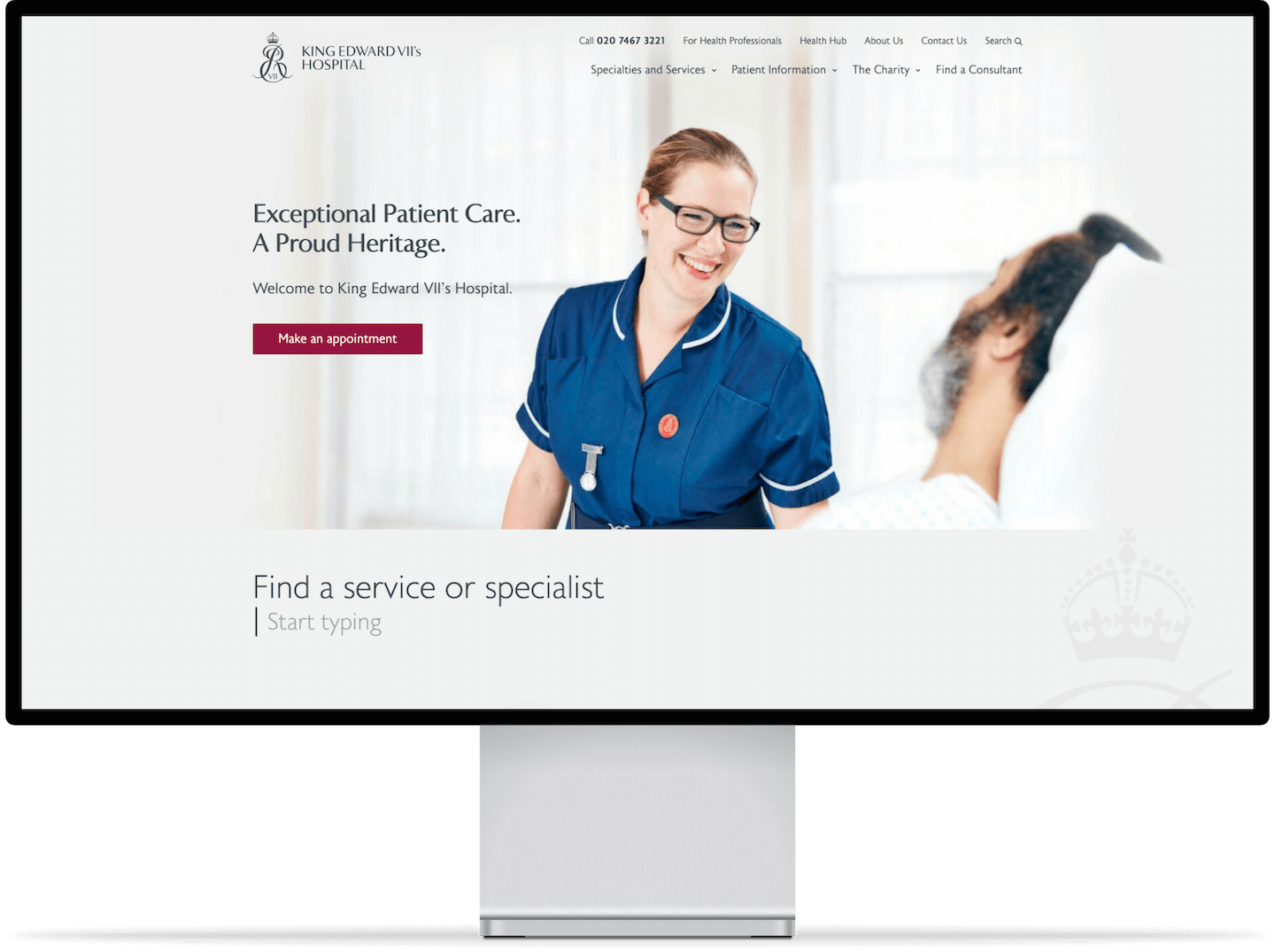 Foster Refrigerator is a company based in Kings Lynn, manufacturing high quality commercial fridges and freezers for use in the hospitality and catering industry.

They needed a new website to market their wide range of fridges and freezers, including cabinets, counters, and display units. 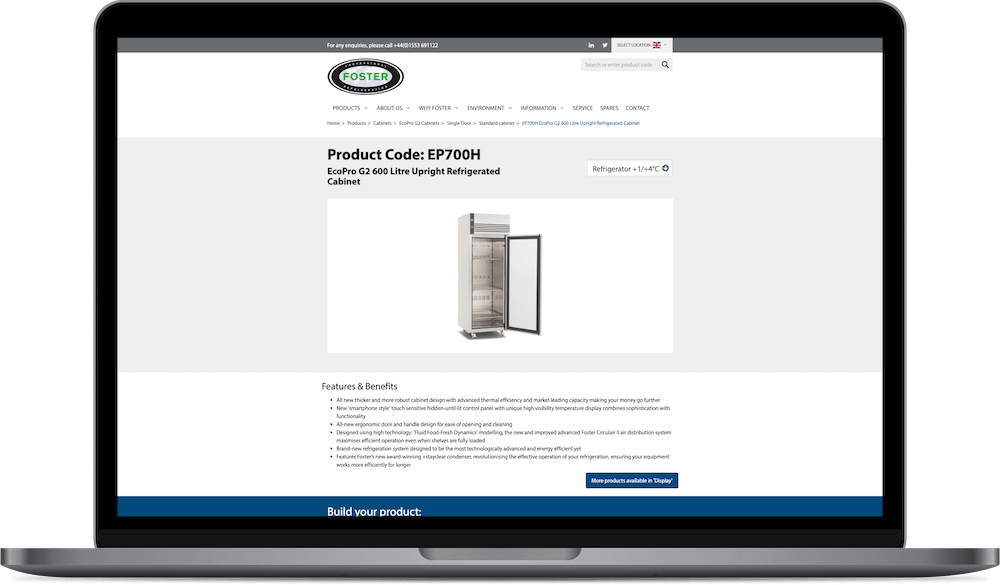 Based on a spreadsheet of data and a customer pricing catalogue, I built a system to import and manage their product inventory consisting of over 1,500 individual items, organised into 6 levels of categorisation, from high-level product types down to individual models.

A complex product attribute system was also developed, which fed into a "build your product" tool to navigate from a high-level product group down to an individual model, by selecting and combining product attributes to find the required product model, ensuring that every model was accessible via a unique combination of attributes.

I helped to maintain this site for several years, until it was eventually retired. 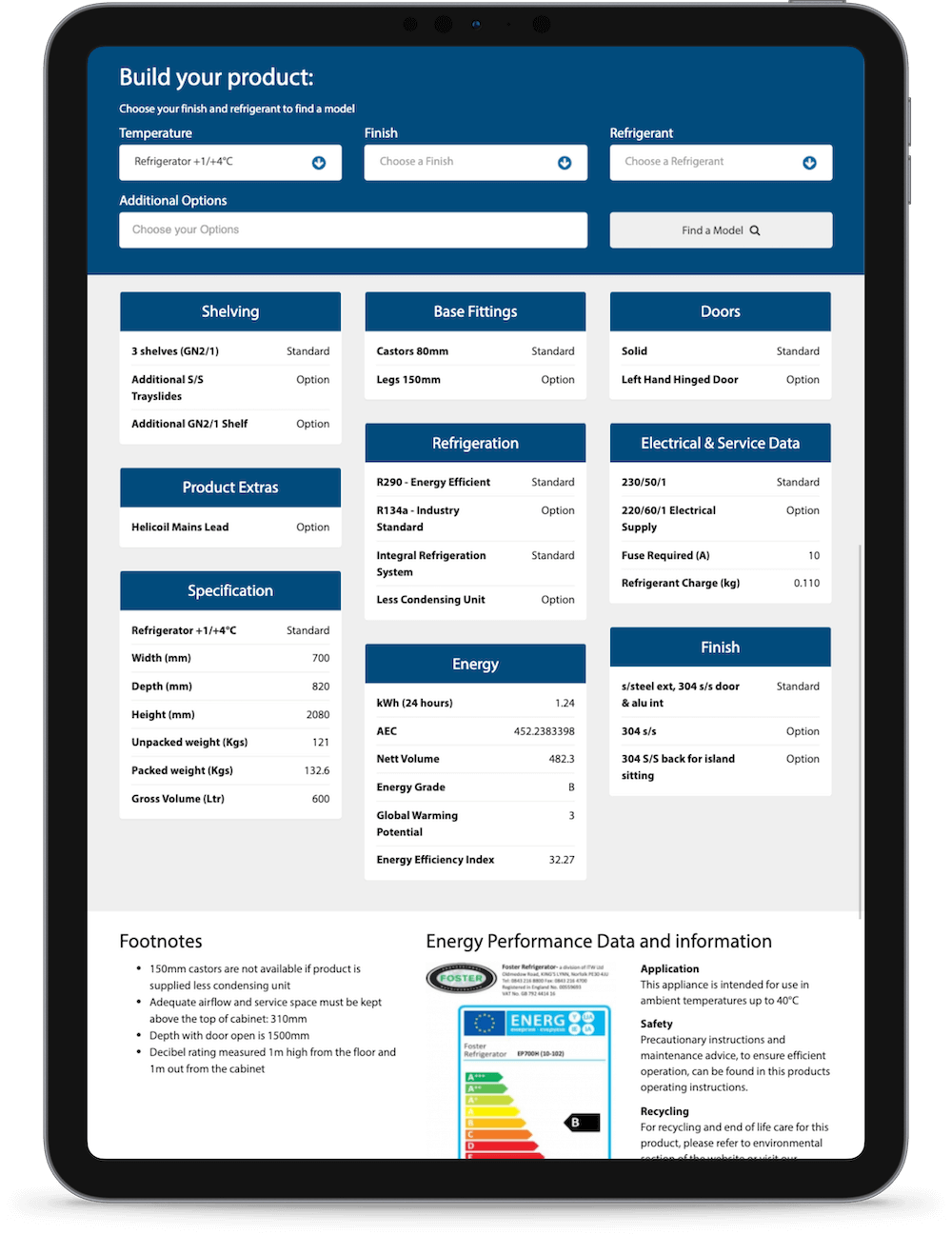 I built their new skip hire booking and quote form, taking payments via Stripe. The website has since been replaced. 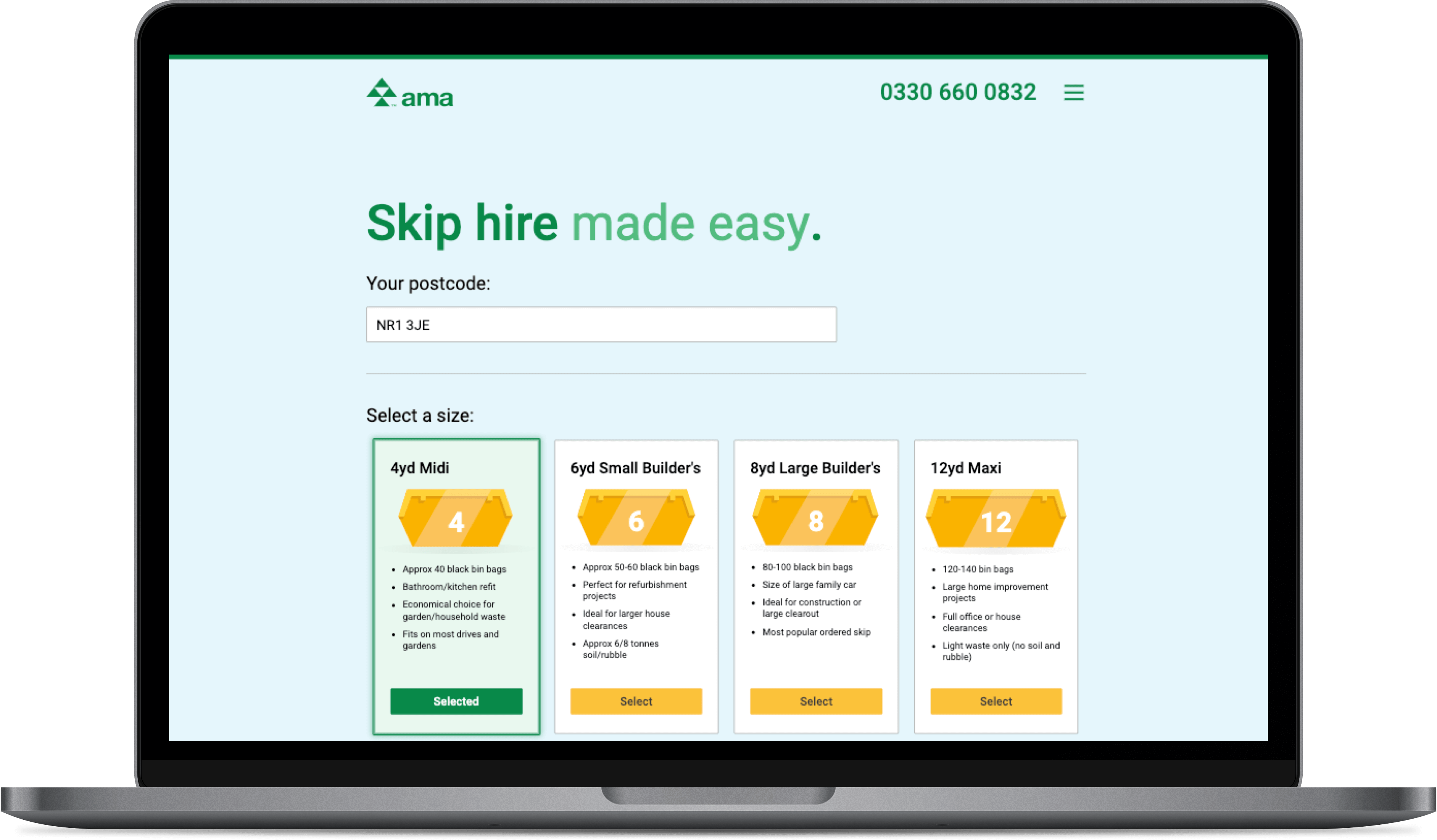 Gadget Cover is a provider of insurance for gadgets such as mobile phones and tablets. I built a bespoke lead generation platform to create and pay for an insurance quote, which turned over several million pounds in the 5 years the site was active before being replaced.

barenakedfoods make and sell low-fat and low-calorie noodles and rice. In 2013, they won a £60,000 investment from Peter Jones on BBC's Dragon's Den, and now sell their products in several major retailers.

I built their new website, including a streamlined e-commerce process to help kick start their new business, however the e-commerce functionality was disabled, and the site has now been replaced.

Support Adoption for Pets is the pet rehoming and rescue centre charity that operates out of Pets at Home stores. They raise money via online appeals and selling merchandise in stores to provide grants to rescue centres to help look after and rehome unwanted and abandoned pets.

I worked on several iterations of their website, featuring pet and rescue centre searches, however the website has since been replaced.

BeInspired Fitness was a social media platform where fitness professionals could list events, and members could register to book on them. The platform centered around a calendar and booking system with recurring events and automated payments, as well as various social media features such as status updates and private messaging.

Unfortunately, despite being complete, the project never launched.